Recently, I've started using VS Code as my external text editor with Godot when working on both GDScript and C# projects. The text editor built into Godot is pretty good, and has really great autocomplete and debugging features, but I've really started to miss my Vim keybindings. :-)

I'd already been using VS Code quite a bit for C++ when contributing to Godot itself or when hacking on SG Physics 2D, my custom deterministic physics engine for Godot. And I also use it whenever I work on a C# project in Godot, although, that's not super often, I mostly use GDScript - it's just so quick and easy!

And it turns out that there's great VS Code extensions for both GDScript and C# Godot projects, that give you (almost) all the same autocomplete and debugging functionality as the builtin text editor.

So, anyway, this has been mostly great... except for one really annoying thing:

By default, Godot will open scripts in the last VS Code editor that was focused - not one with the VS Code workspace for this project!

Now, you don't have to make VS Code workspaces for your Godot projects, but I always do. It helps me keep organized on all the different things that I work on.

Finally, I've figured out how to fix this! And this tutorial will explain how you can do it too. :-)

The solution is quite simple:

Rather than having Godot open VS Code directly, we configure it to open a wrapper script that will check if there is a VS Code workspace for this project, and if so, instruct VS Code to open the requested file in that workspace.

I chose to write my wrapper script in Python, because it's portable to (pretty much) all operating systems, doesn't need any dependencies aside from Python itself, and, well, I like it. :-)

So, first things first, you need to download and install Python 3 on your system. If you use Linux or MacOS, you probably already have it installed.

Then download the script to a file named "vscode-launcher.py" - here's the full source code:

Next, configure Godot to use it in Editor -> Editor Settings... under the Text Editor -> External section: 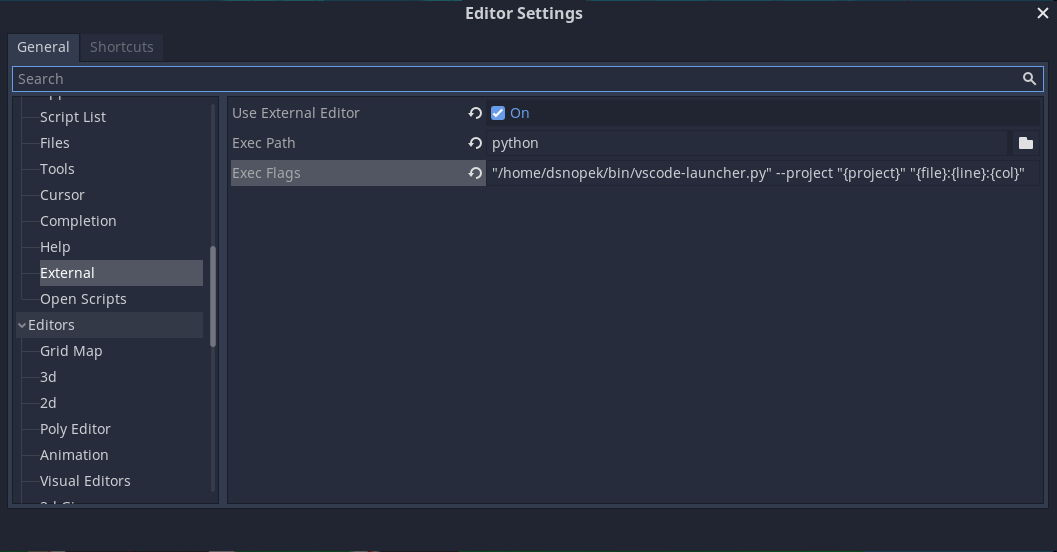 The script will look for a *.code-workspace file in top-level directory for your Godot project, OR in the .vscode directory inside of it. If it finds more than one, it'll arbitrarily use the first one. And, if there is no workspace, it'll just open the file normally, without specifying a workspace.

I've tested it on both Linux and Windows. It may work on MacOS if you set the --code argument correctly, but I haven't had a chance to try it myself.

If you have issues, or suggestions for improvements, please let me know! Or, if you use it and it just works great for you, I'd be happy to hear about that as well. :-)