How to make a VR game for WebXR with Godot

For the last few weeks, I've been working on adding support for WebXR to the Godot game engine, and recording periodic progress report videos on YouTube.

Things have gotten to a point where it'd be useful for other folks to try it out, to help find bugs and give feedback on the APIs. So, I've decided to write this short tutorial on how to use a development build to make a VR game!

Of course, since Godot's WebXR support is still a work-in-progress, there will be changes and after awhile, these instructions may no longer work exactly as written here, so be sure to check my site and YouTube channel for newer information.

What is WebXR and why should you care?

WebXR is an open standard for allowing web applications to work with virtual reality (VR) or augmented reality (AR) hardware.

This means you can visit a web page, click an "Enter VR" button, and then put on your VR headset to play a game, without having to download or install anything. And the Oculus Quest's built-in browser has great WebXR support too!

While playing a VR game on a web page might seem like a pretty weird thing to do, there are some compelling use-cases:

Godot's WebXR support doesn't work with AR yet, but that is also pretty compelling: imagine browsing a furniture store's website on your smartphone, then hitting an "Enter AR" button, which allows you to see what that piece of furniture would look like in the room you're currently in.

Setting up the basics

The basics for making a VR game for WebXR in Godot, are very similar to making a game for any VR platform in Godot:

Next, we need to add a couple things unique to WebXR, that you wouldn't normally use for other VR platforms:

In the end, your scene tree should look like this: 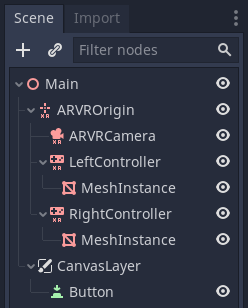 Next, attach a script to the root node (called "Main" in our scene tree image above), with the following contents:

And before we move on, save this scene, edit your project settings (Project -> Project Settings...) and under the Application -> Run section, set your "Main Scene" to the scene you just created:

My PR adding WebXR support to Godot hasn't been merged yet, so you need to use a custom build of the HTML5 export templates.

It's recommended that you use Godot 3.2.4-beta5 or later along with the official export templates for that version of Godot.

However, if you're stuck on an earlier version, I've made some pre-compiled builds that you can download:

Download both the debug and release builds for your version of Godot, and keep them somewhere outside of your project directory.

Next, we need to setup an HTML5 export:

WebXR only works from HTTPS!

If you open a web page over HTTP, your web browser will refuse to support WebXR, so you need to use HTTPS.

This is easy for production, since if you have a live website, you certainly use HTTPS these days. But when running locally for development, it can be a pain to setup an HTTPS server.

There's a number of ways to run a quick HTTPS server, but I've been using browser-sync. If you have NodeJS and NPM or your system, you can install browser-sync by running:

And then  go to the directory where you exported your WebXR app and run:

You can then run your app by visiting https://localhost:5001/<HTML-filename> in your web browser (of course, replacing <HTML-filename> with the name of the .html file you used when exporting).

Debugging on the Desktop

If you have a PCVR headset, debugging is easy, because you're using a desktop browser like Chrome or Firefox. To see any messages from your app (the sort you usually see in the "Output" tab in the Godot editor, or in the terminal), you just need to open the web developer console in your browser, which can be done in both Firefox and Chrome by pressing Ctrl+Shift+I.

However, it can be a pain to put your headset on and off. Or, maybe you don't have a PCVR headset at all. For those cases, there's a WebXR Emulator Extension for both Chrome and Firefox.

It gives you a new WebXR tab in the web developer console, that lets you move around the headset and controllers, as well as trigger some controller events, to make sure your app responds correctly.

Debugging on the Oculus Quest

If you're testing in the Oculus Browser on the Quest, unfortunately, there isn't a web developer console that you can access in your headset.

Luckily, however, the Oculus Browser is based on Chrome, and Chrome has the ability to remotely debug another instance of Chrome.

For the full instructions, see this article on the Oculus for Developers website. Warning: You'll need to install some Android developer tools on your system for it to work.

But once you're all setup, the short version is:

This will give you the web developer console you're used to on the desktop, but connected to the Oculus Browser!

Detecting button presses on the controllers is done in much the same way as on any other VR platform.

Detecting thumbstick and touchpad movement is also quite straightforward, except that the joystick device ids are 100 (for the left, or only, controller) and 101 (for the right controller):

The button and axis ids are defined by Section 3.3 of the WebXR Gamepads Module - this image is particularly useful:

WebXR also provides an alternate way of handling input, that will work even for devices that don't support VR controllers (ex. Google Cardboard) via a set of special 'select' and 'squeeze' events. However, while I'm planning to add an API for these, they aren't currently exposed to Godot.

The select* signals are emitted when the a "primary action" is done, and the squeeze signals are emitted for a "primary squeeze action". What those actions are depends on the device. For an Oculus Quest, those actions are pressing the trigger and grip buttons on the Oculus Touch controllers, but for less capable devices, it could be tapping the screen, even speaking a voice command.

The 'controller_id' passed to each of signals is the same id used by the ARVRController node, so 1 is the left controller, 2 is the right controller and higher ids will refer to non-traditional input sources. You can get an ARVRPositionalTracker object with position and orientation information, as shown in the example above. In the case of non-traditional input sources, the position and orientation should be interpreted as a ray pointing at the object the user wishes to interact with.

I've been working on a WebXR demo where you drive remote-control cars around a track.

If you have an Oculus Quest, you can open that up in the Oculus Browser on your headset. Or, if you have a PCVR headset, connect it to your computer and visit that URL with the latest version of Chrome or Firefox. It can take quite awhile to load (especially on the Oculus Quest), which is another problem I'm still working on, but for now, just wait for a minute or two - it should come up eventually. :-)

I've still got lots of things I'd like to add and improve in the demo (especially around supporting more devices), but if you want to check out the code, it's public on GitLab.

Give it a try and let me know!

If you try to make something with WebXR in Godot, please let me know how it goes!

If everything works, I'd love to see what you make. Or, if things go wrong and you need some help, I'd love to collect your bug reports and get ideas for improving the documentation.